Twice a semester Pennsylvania State University holds its Ed Waterbury Lecture on science, technology, mathematics, engineering and mathematics education. This autumn, one of my main sources of inspiration concerning argumentation in science was the invited lecturer.

Her 1 hr lecture + Q/A session at Penn State University was on the topic of argumentation in education (mainly middle school) and professional development of teachers, titled "Modeling Epistemic Practices in Teachers' Learning: The case of argumentation". This lecture is available on the university's web pages (open access, hopefully online for a long time). 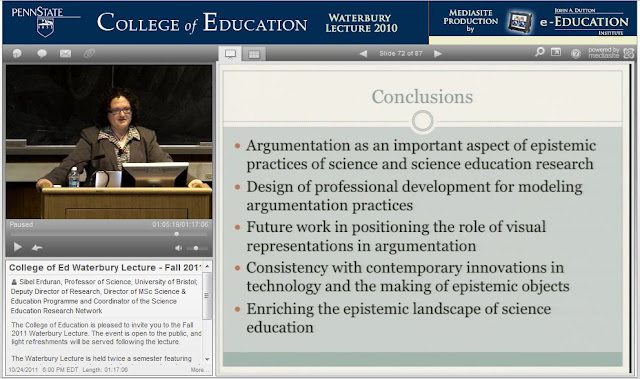 
Why argumentation?
The topic of argumentation has gained increasing interest amongst science educators and educational researchers the last decades because, it is claimed, a science education for the population should not only address "declarative knowledge" (atoms and molecules, chemical reactions, laws of physics, plant biology, planets and stars, physiology etc. etc.) because science is about much more than mere facts. Science is just as much about methods for experimenting, how new knowledge is achieved, how scientists work, how scientific results are used for policy reasons and so forth. Examples of such key questions might be
Many would say that these are things we need to include in school if we want to have a science education that is relevant to people's lives. Even more so because much of the science that is relevant in today's society is far too advanced for most people to follow (e.g. genetic engineering). Hence, understanding "how science works"/"the nature of science" and so forth might be just as important as being able to recall, say, how photosynthesis works.

Kitchen stories and argumentation
The Kitchen stories project is basically about collecting claims/statements about what to do when you cook (as given by cookbooks, old wive's tales, culinary school instructions, your grandma etc.), and then use this claims for various purposes. The purposes might be scientific study of food phenomena, teaching, historical perspective on food and cooking etc. Examples of such claims might be "sprinkling lemon juice on fruit salad to prevent it from turning brown" or "you should brush mushrooms, not rinse them".

The basic idea behind the argumentation part of this project is that every such claim, or rule, is in fact a fragment of an argument. The claim might be true or not, coherent or incoherent, complete or incomplete. But still it's at least part of an argument, and we can use this to either experiment with food, learn about argumentation, learn about food/cooking etc. I've described the ideas behind this project previously, mainly in a three-part series as well as a conference lecture/paper. The two entries most relevant to argumentation are the conference paper (uppermost) and "Culinary precisions part 2:3. Analysing statements...":

I believe that the Sibel's lecture might be a good help in bringing this project one step further, particularly the theoretical parts of it, but perhaps also the practical ones. Thanks, Sibel :)
Email ThisBlogThis!Share to TwitterShare to FacebookShare to Pinterest
Labels argumentation, culinary precisions, curriculum, education, kitchen stories, learning, people, publications and books, Toulmin