Statements on what to do, how to do it, and occasionally why to do so, are abundant in the world of food and cooking. This is the second post of three, and deals with a rationale for analysing such statements. The third post will deal with the potential of using this for educational purposes, both in science and food disciplines.

In the first post, I wished for, and tried to give good reasons for building a database of statements on food and cooking (culinary precisions). For an introduction and definition of culinary precisions, see part 1.

The two other posts:
Culinary precision = claim
A culinary presicion is a statement about something related to food or cooking, such as
Some precisions contain reason(s) for why one should follow them, others give a consequence that might occur if you don't follow the advice given. During a course on argumentation in science education, I realised that culinary precisions might indeed be considered to be claims. Occasionally, these claims have some data or warrants to explain why you should follow the advice given, and sometimes they don't (first case: "if you do A, B will happen", second case: "do this"). Hence, we are in the domain of arguments.

A system for analysing statements, claims and arguments
For analysis, understanding and testing such culinary precisions, it'd be good to have some coherent system or scheme to fit it into. Argumentation theory has struggled with the analysis of claims and arguments all the way back to Aristotle (and probably earlier). However, the "traditional" (syllogistic / syllogism) way of analysing an argument does only work for a certain type of arguments, and often fail to incorporate all aspects of real-life problems and discussions. Hence, other perspectives on logical arguments have appeared. Among these is the one presented by philosopher Stephen Toulmin. The Toulmin argumentation pattern is a way of organising, analysing and visualising practical real-life arguments, and is often shown in a diagram: 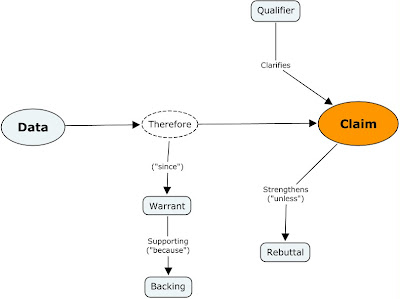 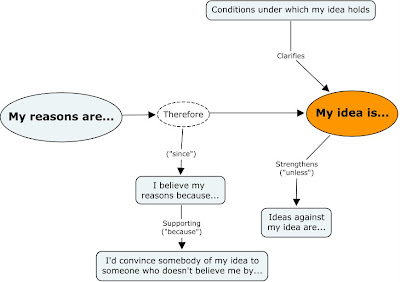 Toulmin's argumentation pattern (TAP) and culinary precisions
The diagrams shown above are rather comprehensive, and it might not be relevant to use all categories at all times in dealing with culinary precisions. There is some work to be done, figuring out in detail how to apply these in a neat way. And maybe there are other schemes that work even better? However, the TAP affords several very attractive qualities:

Two examples of the TAP applied for a culinary precision: 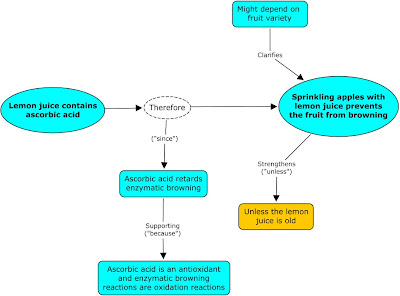 Preventing apples going brown by sprinkling with lemon juice:
The precision is true (colour code blue), but only under certain
conditions (the rebuttal is given a different colour code). 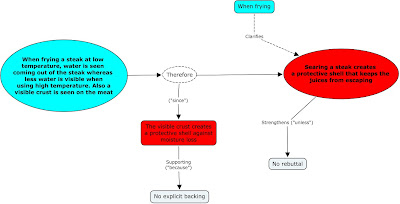 Searing a steak: The data hold (colour code blue), but the warrant
is shown by experiment to be false, hence the claim is false (colour
code red). Furthermore, the argument lacks backing and rebuttal.

Conclusion
It would be interesting to explore further the potential of using the TAP, or some other way of rationalising arguments, for the analysis of culinary precisions. This work should in turn show whether this approach is fruitful for the sake of the study of culinary precisions. Maybe the pattern/system needs to be modified or simplified in order to be of real value.

Walton, D. Various publications available at www.dougwalton.ca/papers.htm (papers on tools for visualisation/analysis of argument are probably most relevant, such as Araucaria)