Peter Barham writes that chocolate is shear-thinning; it becomes fluid when shear stress is applied to it, such as by a meat grinder. I went on grinding...

A shear thinning, or pseudoplastic, medium is one that exhibits decreased viscosity when shear stress is applied. The most common example is probably ketchup. Turn the bottle upside down, and the contents stay put. Give the bottle a knock, and annoyingly half the bottle pours out. The same phenomenon is in action when a great landslide results from just a small shaking (i.e. quake) when the area resides on clay ground. Paints also rely on this phenomenon: they are runny when brushed or rolled, but become viscous as soon as the pressure is removed, and thus don't run down the wall.

Following Peter Barham's idea, I had another look in Beckett's "Science of chocolate", which confirmed that chocolate is shear thinning (I suspect that Barham indeed refers to Beckett). In addition, when the softened chocolate firms up again, after just a few seconds, it recrystallises in the same crystal form as before. This is important, because heating-cooling sequences (such as when melting melting) might lead to blooming, such as fat bloom.

My idea was hence: is it possible to use this property to shape chocolate and still avoid the need for apparently laborious and complicated tempering?

My only available equipment for applying shear stress on such a hard medium as chocolate was our kitchen machine with the meat grinder/mincer attached. Running the chocolate through this grinder, the result was what I've termed "chocolate twigs":

Comments on the result
I'm fairly content with the result, but my detailed knowledge of crafting chocolate isn't good enough for me to do a proper evaluation. Even though the texture seems fine, still a nice snap when braking, the colour and surface structure is changed. Maybe that's just OK? However, there are some relevant points to consider:

- The point is applying shear pressure, and not melting the chocolate- Amount of chocolate
You need quite a lot of chocolate to produce a moderate amount of twigs. In the video above, I spent 400 g. However, the chocolate may be run several times through the grinder. The rest is of course perfectly OK for making other chocolate-based stuff, or maybe practice tempering chocolate...

Coarse or fine mincing screens?
The coarse screen (8 mm holes) was the only one that worked in my hands, as the finer ones resulted in too much resistance. Too much resistance results in clogging and eventually warming/melting the chocolate.

Equipment
Our Kenwood Major (800 W) did the job, but I felt that I overloaded it slightly, especially when it clogged. Dark chocolate is really hard stuff. It'd been fun having some professional extrusion equipment with enough power and temperature regulation allowing to make various shapes. Barham mentions using a pasta machine for "shear shaping" chocolate, but I doubt it'll be strong enough to shape the chocolate, rather than crumble it. Maybe it'll work with milk chocolate?

References
I didn't find any directly relevant scientific literature on this, and the two only references I've found mentioning this (briefly) are

Also, Corriher's "Cookwise" has quite a lot of information on dealing with chocolate (again, I've still not got my hands on a copy of Bakewise

As this year's Easter greeting, Deptartment of Chemistry at the University of Oslo has developed an egg cooking calculator with reference to Martin's Khymos and my Maturfag ("Norwegian fooducation").

The issue of cooking the perfectly boiled egg has been discussed several places, amongst others on Khymos, fooducation, and on "Maturfag" which is fooducation's teacher resource pages at the Norwegian Centre for Science Education (Google translation of the resource pages here). Also, Douglas Baldwin's Practical guide to sous vide cooking has an excellent section on controlled-temperature cooking of eggs.

Formula for calculating the boiling time for eggs. For details and
references, see Khymos egg boiling post
Now, Department of Chemistry in Oslo has converted this formula into an interactive animation/calculator for cooking your Easter egg the way most people do it: in boiling water. This has already collected some attention, amongst others in the national newspaper VG (and supposedly on radio at the national broadcasting corporation NRK during Easter holiday). The cooking time depends on several factors, taken that you use boiling water: 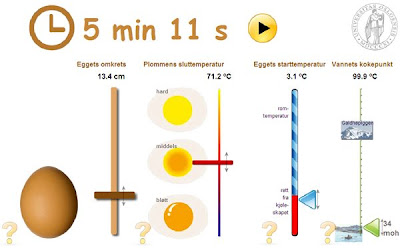 The categories should be rather self-explaining. Click the illustration to go to the calculator
(I love the nifty automatic timer function :)
Tip: For measuring the circumference of the egg, use a piece of string and measure the length that goes around the "belly" of the egg.