On the occasion of me attending this week's episode of the Norwegian popsci TV series "Schrödingers katt" (and YouTube) about miracle fruit I'll post two entries on miracle fruit/miraculin. The first is a reposting on a previous entry, expanded with a few more tasting notes. The second post will be a collection of facts about miracle fruit including references to primary literature. Part 1:2 follows below.

The following entry was previously published 7 August 2010, slightly revised.
Note: the original blog entry has some interesting comments worth having a look at.


For some time now, there has been somewhat of a hype about the miraculous berry that makes everything sour taste sweet. Some time ago, I ordered a packet of dried and powdered miracle fruit tablets and gave it a try. The following post gives some background and the results of a truly fascinating experience.


The miracle fruit is a a berry containing the glycoprotein miraculin with the unlikely effect that when your taste buds meet this substance, you taste sour foods as they were sweet. That is, your perception of sourness is altered. In certain parts of the world, the substance has been used for quite long, whereas in USA and Europe it has not yet been cleared for use as additive. The berry in itself is allowed, but unfortunately they don't keep for long and are apparently not suited for shipping fresh. However, a freeze dried version made into tablets does exist and this is the version I tried. 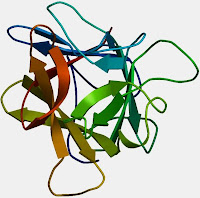 There is quite some amount of research on the effect and mechanism of miraculin on our tongue as a google scholar search for "miraculin" reveals. The first scientific report was in Nature as early as in 1968 (correction: first time published in 1965). There is also research indicating that other plants exhibit similar effects, such as curculin from the Curculigo latifolia plant. The miraculin protein structure shown here is taken from the Swiss protein structure homology-modeling service.*