Many a Christmas dinner, we end up with the potatoes falling apart in the dish and pale olive-green Brussel sprouts. Does it have to be like this? Using a little scientific knowledge in the kitchen can help.
Part two - green vegetables
Brussels sprouts and the broccoli: Do you prefer a fresh, vivid green colour, or a dull olive green? The colour in green vegetables is due to chlorophyll, which is a compound well suited to play around with. The green colour in chlorophyll is due to a magnesium atom (in fact, an ion) attached to a porphyrin ring, and acid can substitute this magnesium altering the colour. Try adding a little lemon juice or vinegar to the water next time you cook green vegetables if you want to do a “sabotage experiment” just to see what you may want to avoid. This kind of sabotage experiments are, in my opinion, just as important as the “successful” ones.

Chlorophyll molecular structure at pH = 7 (neutral/basic) to the left, and pH<7

Fruit and vegetables contain a little acid, so if we use pure water or steam the, this acid is in fact sufficient to alter the colour in a negative way. As a remedy, try adding a couple of teaspoons of (sodium) bicarbonate/natron per litre of water. This makes the water slightly basic. The water will turn green as well, but there is more than enough chlorophyl left for the vegetables. Short cooking times is also recommended, as chemical reactions take time, and the replacement of magnesium is no exception. This is probably the reason that the colour change is more visible in Brussels sprouts than broccoli, the sprouts cook longer and thus more of the chlorophyll is degraded. 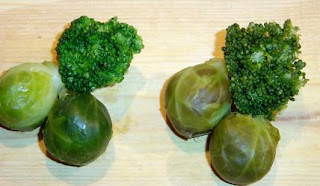 Left: cooked with a little bicarbonate (pH ca. 9), right with a little lemon juice or vinegar (pH ca. 4.5)
So, in the two posts conclusion: treat the potatoes and vegetables the opposite way.

PS: have any idea why the water turns green on adding bicarbonate? Please let me know. 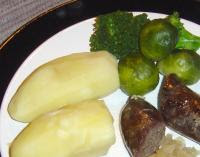 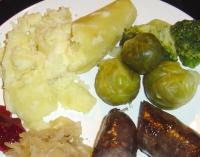