Is it really true that you shouldn't rinse, but rather brush, mushrooms? Should a steak be seared to keep the juices inside? The world of food is full of statements on how to do things, many of which are rooted in tradition. When tradition and science meet, interesting things might happen. This is the first post of three on the topic. This first part argues for an open database of such statements, including analysis. The second will deal with a rationale for analysing such statements using argumentation patterns. In the third post, I discuss the potential of using this for educational purposes, both in science and food disciplines.


The two other posts:

A short introduction for newcomers: Dealing with statements on food and cooking is among the major objectives of molecular gastronomy (MG for short, a term and field which enjoys quite a lot of debate, both in terms of its name and also because it is a field in it's infancy. There is a debate running in various channels, but discussing MG in general is not the topic in this post). As defined by Hervé This, such statements are called culinary precisions. You might just as well say "old wives' tales", "culinary proverbs", "cooking rules/advice", "know-how", "adages" or "maxims". I have no strong preferences on what words to use for this, but thus far I think "culinary precisions" does the trick and will adhere to that.


There are a few publications speaking of culinary precisions (such as these four). To my knowledge most publications are focussed on speaking of this phenomenon rather than doing a real analysis. For several reasons, this would be very interesting to follow up. I've found only one collection on the www, by Hervé This, which is in French (unfortunately I don't speak French and have to rely on automated translations). However, this collection lacks the analysis aspect. 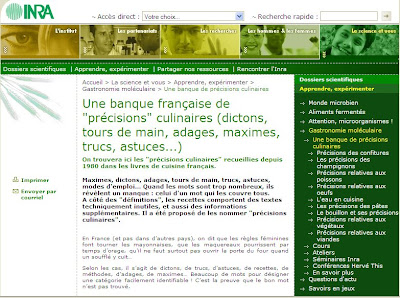 A few words on culinary precisions
Culinary precisions are those rules you've learned trought tradition, or what cookbooks (or celebrity chefs) tell you to do, when you deal with food. A couple of examples were mentioned above, as far as I know both are false. However, culinary precisions might also be true. Hervé This has suggested dividing them into five categories:
Hence, the objective of collecting and testing culinary precisions is not a scientific crusade against tradition. Indeed, category 2 is maybe among the most interesting, and might be an arena in which tradition and science can meet to exchange knowledge and experience.

Why collecting culinary precision? Food is deeply rooted in tradition and crafts. In our modernised world knowledge of this kind runs the risk of being forgotten. In itself this is sufficient motivation, especially since many such traditions are not written records, but handed down from person to person. Also, there is the educational potential, as I'll comment on in part 3. Furthermore, it might even help cooks and others making good food. And finally, I think it could be great fun :)

What is needed in exploration of culinary precisions?
In my opinion, there are three aspects that might be interesting to explore:
Each of these points features a number of subquestions. I deal with the first one below, the other two are being discussed in the following blogposts.

A web-based database
It is said that culinary precisions are being collected in several countries. Different countries have different cuisines, but do also share common traits. Collecting all the precisions in one common base would ease comparison, and possibly save quite a lot of time and effort. Double/triple/quadruple work is avoided, and a higher number of precisions might be collected. Alternatively, one can compare one's testing of a precision with the same or similar precisions from other countries. Databases are searchable and sortable, allowing for analysis and comparison.

Culinary precisions reflect the identity of a national/regional cuisine. A sufficiently large database might say something about the various identities and food traditions in different countries.

An international base would force through a coherent way of documenting precisions. Many fruitful questions will arise that have to be decided upon: what are the criteria for something to be defined as a culinary presision? What information should be included?

Finally, such a base will stimulate collaboration, the product being concrete and useful for the collaborators as well as a general public; research, collaboration, dissemination, internationalisation - all in one.

There are so many reasons that such a base might be highly fruitful.

Conclusion
If it hasn't been done already, it'd be really interesting to see, attend, or set up, a project on this, trying to create a database that is open to read for the public and open to write for a selection of individuals/groups. Furthermore, it might be a good arena for meaningful and constructive collaboration, both within MG, and between different fields of work/research. One example being between those involved in the pure sciences, and educators at various levels. Hence, the potential of dissemination is great. Funding is always a problem, but might start by applying for some internationalisation/exchange program funding (Erasmus, Nordplus etc.). Such funding is rather easy to get, at least here in Norway in which international collaboration is generally promoted.