"They go really well together" round no. 13 is hereby announced. In taking on the task of hosting this somewhat sinister-sounding round, I thought a whiff of Christmas might be a proper safeguard, announcing caraway and cocoa/chocolate as flavour partners.

For newcomers: TGRWT (They Go Really Well Together) is a monthly(?) open invitation to come up with dishes that combine certain given ingredients that are supposed to match well. The hypothesis is that foods containing one or more common major volatile compound will work well in combination. The result of this might thus be a range of new and, sometimes unlikely, good combinations of ingredients. For further introductions to the topic, see the foodpairing web site and the introduction to the topic at khymos. 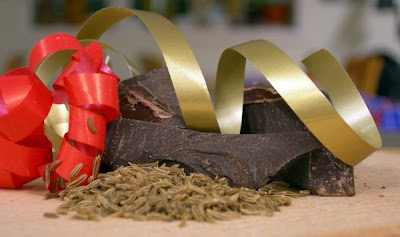 This is how you can participate in TGRWT #13:

1. Prepare a dish that combines chocolate and caraway. You can either
use an existing recipe (if there is any) or come up with your own.

2. Take a picture of the dish and write an entry in your blog by
January 1st with TGRWT #13 in the title. Readers will be particularly
interested in how the flavour pairing worked out, so make an attempt
at describing the taste and aroma and whether you liked it or not.

3. A round-up will be posted here (with pictures). Please send an
email to erik_at_fooducation.org with the following details: Your
name, URL of blog, URL of the TGRWT #13 post and a picture for your
entry in the round-up. If you don't have a blog, email me your name,
location, recipe and a brief description of how it worked out and I'll
be glad to include it in the final round-up.

I'll have a look in the literature, and in the round-up I hope to be able to say something about what makes these two ingredients match, at least according to the favour pairing hypothesis.
Email ThisBlogThis!Share to TwitterShare to FacebookShare to Pinterest
Labels chocolate, flavour, spice, TGRWT