Recently, I published a popular science article in Norwegian. Title might be translated "Christmas cookie chemistry, ...and some physics" on www.naturfag.no/mat. Focus is testing the effect of using different chemical leavening agents on the same cookies (yeast is hence not the issue here). A summary follows.

Why do some recipes require baking powder, others ask for baking soda, and yet others want hartshorn (baker's ammonia). For some cookies, various recipes for the same cookie even ask for different leavening agents. Puzzling...

(In writing this, I've realised that hartshorn is a rather rare ingredient in English speaking countries(?), even though it's still common in Scandinavia, and possibly also in central Europe. See references in the end for some information)

The chemistry, in short 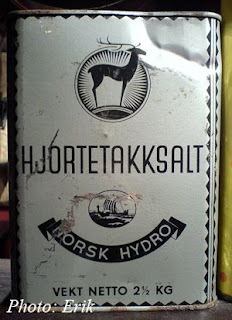 The two former produce CO2, whereas the latter produces both CO2 and ammonia (NH3). In all cases, gas production results in bubble expansion, giving porous and levened cookies.

Physics, in short
Either whipping eggs with sugar or creaming butter + sugar generates bubbles. When placed in the oven, the air in the bubbles expand and (more importantly) water evaporates expanding the bubbles.

Discussion
Both baking powder and hartshorn do not require any other ingredient to work properly.

Hartshorn liberates CO2 and ammonia. Ammonia is quite a basic substance, and seems to give rather marked different results compared to the rest (see below). Also, harthorn gives crisp, brittle and porous cookies. I haven't found any sources say exactly why, however (frustrating...). One reason might simply be of physical nature: cookies made with hartshorn are perforated due to bubble formation in a rather dry dough, resulting in cookies with lots of small holes.* 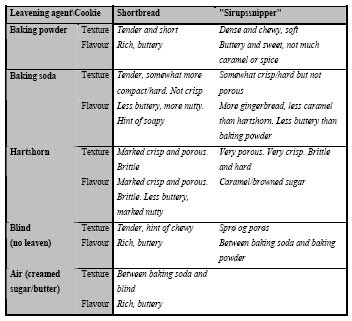 Of course, there are lots of variables to take into account in addition to the ingredients; baking temperature, baking time, inhomogenous temperature in the oven, using more than one tray, craftsmanship etc. The experiments above were conducted in identical fashions as far as possible. The various versions were not baked on the same tray, however, which would have given the most comparable results.

Some rules of thumb
Skipping the leavening agent altogether is also an alternative that should be considered.


* Harold McGee has an interesting entry on hartshorn, however erraneously stating that ammonium bicarbonate does not release water. Indeed, it does as seen from the reaction scheme below. I gues, the main point is that hartshorn does not require water to funtion, allowing for rather dry doughs (flour - sugar - butter).