It's time to sum up the entered dishes for They go really well together #13. From the entries, it seems like caraway and cocoa/chocolate indeed do go well together.

However, for starters it should be mentioned that this combination has been discussed on khymos at several instances already. Also, I was made aware of the fact that pumpernickel contains both of these, see discussion and links at Medellitin.

What fascinates me with this month's entries is that you can literally build a whole multi-course meal on caraway and cocoa (in order of submission):

Caraway cocoa chili
by Brian at The Food Geek
[...] the chili turned out great, [...]all the flavors were balanced quite well. I could certainly taste the caraway, [...] and it definitely adds a new note to the chili. Probably some sesame would have rounded it out nicely. 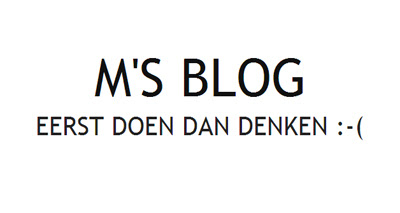 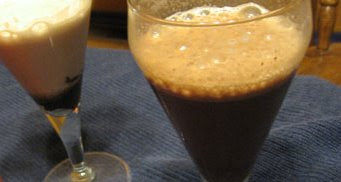 Caraway cocoa egg cream
by Rob at The Curious Blogquat
I was able to get the caraway flavor to stick with the chocolate [...] The chocolate is already subdued in an egg cream due to the seltzer, so it was nicely balanced with the caraway. We both enjoyed the drink and found it to be a nice pairing. [...] Interestingly I wouldn't do this combination again, but only because its a bit too "normal" for my liking. It was too good together, and not enough "wow" factor. 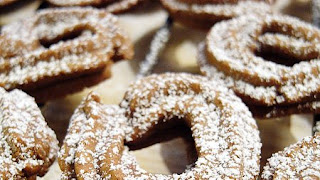 Chocolate cookies with caraway
by Martin at Khymos
In the stripped down version with only cocoa, caraway and some bitter lemon peel there you first notice the cocoa, then there is an aftertaste of caraway. I like caraway, so I was very pleased with the result. [...] Anyhow I think the 10:1 ratio of cocoa to caraway worked very fine. [...] With all the other spices present I wasn’t able to single out the caraway flavor, but it (probably) added to the overall complexity. I really recommend the recipe - even if you decide to omit caraway! 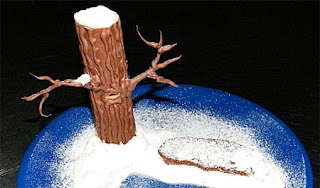 Chocolate-caraway mousse/caraway caramel tree surrounded by coconut water gelee pond, white chocolate-caraway-rye bread puree and dehydrated chocolate mousse rock (!)
by Larry at tri-2-cook
I like the flavor combo. It's not a powerful statement and it wasn't particularly easy to keep the caraway at the top of the flavor profile with the chocolate but they really do "go well together". Fun stuff. 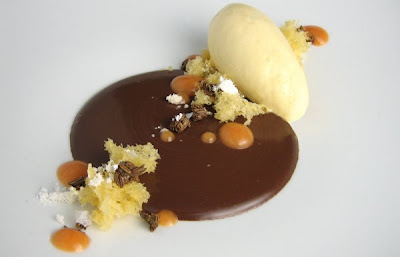 Chocolate - caraway - peanut - Kumquat dessert
by Sølve at strezzafoods
I was quite happy with the result. A rich creamy dessert, and the caraway brought a spicy dimension that was both new but also very harmonious. The kumquat added much needed acid and bitterness. All in all a very different and amusing dessert, almost savory with nuts, spice, bitter chocolate and salt.

Beignets with Duck, caraway-chocolate and juniper sauce
by Alessio (alessiofangano [at] msn.com) 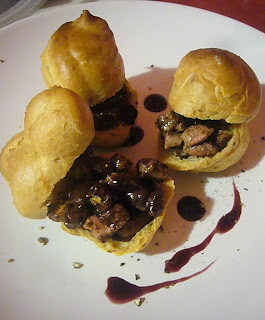 Put the red wine with the juniper berries in a small saucepan and reduce over low heat with the lid on. When reduced of half, add the sugar and let simmer for some minutes. Strain trough a fine sieve and add guar gum while still warm. Brown butter on a skillet over medium fire. Strain and reserve. Grind caraway seeds in a mortar or spice grinder. Melt chocolate, caraway powder and 1 tsp of brown butter over a bain marie. Pour it on a shallow container so that the chocolate layer will be around 4mm thick. Let cool down at room temperature, unmold and cut into cubes. Refrigerate until ready to use. Take away the skin from the duck breast. Cut the meat in small dices. Render the duck skin in a warm skillet under a weight, drained the excess fat from time to time. Put the brown butter on a pan and when well warm, sauté rapidly the duck dices. Mix duck and chocolate dices in a bowl. Open in two the beignets, put in the lower part some of the duck chocolate mixture. Spoon over a teaspoon of the red wine sauce. Grind over some black pepper and close with the upper part and serve.

Verdict: When eating the beignet, the first aroma to be perceived is that of the juniper. The crunchiness of the beignet is followed by the juiciness of the duck meat and the barely melting chocolate with its caraway notes. In the whole the dish works very well, the tricky part is in the lightness of the beignet. The flavors come out very harmoniously and fulfilling. Chocolate and caraway are a perfect combination especially with red meat or game.

Chocolate sauerkraut
by Ole Eivind at Helt naturlig
As the sauce coated the cabbage shreds, the initial taste was very chocolatey with a nice caraway aftertaste. I could clearly taste that the two ingredients go really well together. The texture wasn't too bad either, but I wouldn't call the dish a success. The cabbage itself didn't work well, and for a dish consisting of little more, having the cabbage work against you can't be described as much other than a failure. It was an interesting failure however [...]

Almond-caraway coated chocolate truffles
by yours truly at fooducation
Firstly, a burst of crunchy, salt, roasted almonds followed by rich, dark chocolate. Second, while the chocolate melts and the cocoa flavour still dominates, the caraway comes through and lingers on together with the chocolate. [...] the chocolate and caraway work very well together.

Some comments on caraway aroma and flavour pairing with cocoa
Interestingly (at least to those of us with chemistry-oriented brains), the compound responsible for the intrinsic caraway aroma is (S)-carvone. The other stereoisomer, (R)-carvone, has a spearmint aroma. A striking example of the effect of chirality/handedness in chemistry: the two compounds are identical apart from the fact that they're mirror images, resulting in very different aromas.

Also, Flavornet has information on flavour components in caraway, only including carvone and carveol isomers, though. Compared to chocolate and cocoa, caraway seems to be a relatively uncomplicated mixture of aromatic substances. Is this possibly due to roasting of the cocoa beans resulting in very complex mixtures of aroma substances in these (from Maillard reactions etc.)?

I was quite surprised when I didn't find any direct matches between caraway and cocoa/chocolate. Maybe are any common substances in low concentrations? A caraway+cocoa google cross-search at The good Scents company returns a lot of hits, but none(?) with natural occurrence in both ingredients. The matches are mostly in the "odor and/or flavor blends with" category. This is of course uplifting, but gives no definite answers in terms of common components. If anyone can come up with such matches, I'd be happy to have a comment.

Finally, I can't resist taking a somewhat amusing detour by the 1927 Nature article Fluctuations in Affective Reactions to the Odour of Caraway Oil by J. H. Kenneth:


"Fluctuations in the affective reactions to caraway oil claimed attention [...the preference being] higher after lunch than that before. In the case of camphor, rosemary oil, menthol, sassafras oil, fennel oil, and a few other odours, no consistent fluctuations of this nature wore [sic] observed."


So, according to Nature, it's not indifferent what time of day you have your caraway. The paper also includes a plot of preference of caraway odour vs. time of day and moon phases :)
Email ThisBlogThis!Share to TwitterShare to FacebookShare to Pinterest
Labels chocolate, flavour, food pairing, recipe, spice, TGRWT