The "They go really well together" relay rolls on, and it's time for #12 - matching chanterelle and apricot. Host for this round is Tri2Cook. I've been rather reluctant to try on mushrooms in cooking, but there has to be a first time for everything. So, I strayed into the kingdom of fungi.

Since we had bought a lamb earlier this autumn and had planned on a dinner (literally) on parts of this for some time, I thought this might be a good opportunity. At a wedding dinner many years ago, we were served a wonderful creamed chanterelle side dish with some meat that I now have forgotten (but the chanterelles etched into my memory). We were going to be eight at the table, of which two were children.

The day in beforehand, apricots were chopped in small squares and soaked in the double cream. The mixture was warmed in the microwave until lukewarm and then left to infuse in the fridge overnight, resulting in a yellow apricot-flavoured cream, in which time it had almost solidified. Thinned with skimmed milk and some water until fluid. 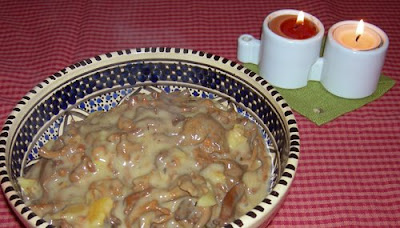 Lamb shoulders
The day in beforehand, two shoulders from a small free-range lamb (12 kg after slaughtering) were rubbed with a mixture of thyme, rosemary and ground black pepper. Slashed and half garlic cloves inserted. Left to marinate overnight. Next day rubbed with salt and placed in cooking bag. Added one onion cut in four, 3-4 coarsly chopped carrots and a one coarsly chopped cellery. Left in 110-120 °C oven for 4.5 hrs. Since the meat was home-slaughtered free-range, I turned down the idea of a sous-vide approach and went for meat cooked to the brink of disintegration (interior temperature was 100 °C for 1.5-2 hrs).

Gravy
The juice from the lamb shoulders was used as base for a standard gravy made with corn flour, adding the rest of the reduced chanterelle stock.

Verdict
The lamb was great, cooked greens and mashed potatoes/carrots don't need further comments. Two shoulders from such a small lamb was sufficient, but not too much for eight people.

The creamed chanterelles/apricots (chanterots, maybe?) were good, but by no means exceptional. I realise that my lack of formal food education might play a role here, combined with my lack of experience with cooking mushrooms in general. The creamed chanterelles were based on a recipe, but felt somewhat insipid and lacked some sort of freshness. It was almost like chanterelles and apricots were too similar (doubly insipid, in a way). Adding blue cheese made a difference, however, cutting through the rather bland, mildly sweet taste. Maybe the "chanterots" lacked acid, or perhaps a little soy sauce? Or was lamb not the perfect match? Pork or turkey might work even better with this one.

A few thoughts on the pairings in this meal
In planning the meal, I browsed through the main ingredients over at the food pairing site. Starting with the main flavour contributors lamb, thyme, rosemary, garlic and apricots. There were no separate scheme for chanterelle, but one might maybe use mushroom, or...? Not surprising, several matches came up, resulting in the inclusion of blue cheese on-the-side as well as choosing carrots as part of the vegetables. I wanted to add chopped almonds as well, but unfortunately I forgot. The resulting food pairing scheme of the ingredients used is shown below (created using the free CmapTools mind map software). 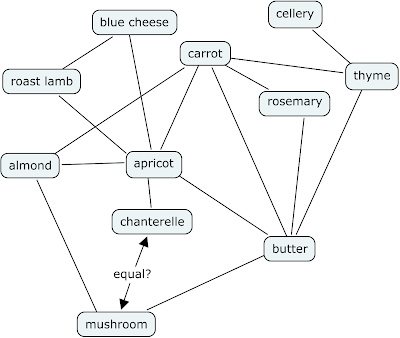