In this third post from this spring's Norwegian Barista Championships I summarise the most interesting seminar I attended. It was hosted by former world champion barista Tim Wendelboe and focussed on tasting defects in coffee.

I attended two seminars by Tim Wendelboe during this year's event, and of the two the one mentioned here was definitely the most rewarding for me personally.

WORKSHOP/SEMINAR: Flavour defects in coffee
(by Tim Wendelboe)
I always tell my students that if a recipe warn them not to do this or that, they should deliberately try doing it at least once (e.g. don't get egg yolk in the egg whites when whipping meringue, don't open the oven when baking sponge cake etc.). If you don't know how things look or taste when they're failed, it's difficult to have any reference for what's successful. So, go ahead - be disobedient! Tim had indeed done so and collected coffees with various defects in which he brewed cups of defective coffee. The cups were brewed as he would have brewed any other coffee; to the best of one's ability. Not only so, he had also done his best effort to single out the various defects so that we could taste each type of defect separately. Elegant, interesting and very enlightening. The defects we got to taste were:

Faded coffee
(this paragraph has been re-written subsequent to a comment)
at least two reasons for this. The first is past crop vs. new crop. Past crop = coffee that has been stored for some while (e.g. last season's crop) before roasting and sale. This is a typical problem if you are served, say, a Costa Rica coffee this summer because the harvest season is August-December. The second reason for fading is a processing defect if temperature has been too high during drying (e.g. using closed greenhouse-like drying houses with too little airflow). The characteristic of faded coffee is on my palate more subtle and not that critical a defect, but results in lower fruitiness and more woody flavour. The acidity might still be there, but the fruit is more or less gone. So if you get a bag of great Kenya or Panama coffee out of season, don't be surprised if you can't taste all they claim it does on the description on the bag. Also, this defect is easy to get your hands on, even among speciality dealers. Get your hands on a bag of Indian Monsooned Malabar or some Old Brown Java Coffee from Indonesia. These coffees are deliberately aged at the green bean stage to develop a flavour which one would consider being a defect in most other coffee. 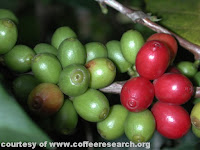 many inexpensive coffees are being uncritically strip picked resulting in a mixture of overripe, unripe and ripe beans; everything is picked at the same time and nothing is thrown away. Characteristic defect flavour would be peanut, old nuts and unpleasant acidity. I would add that unripes also would give a pea-like or grass-like flavour (picture by courtesy of www.coffeeresearch.org).


Old/rancid coffee (subsequent to roasting)
(this paragraph has been re-written subsequent to a comment)
develops an rancid aroma just like the really cheap coffees you can buy in supermarkets. I'd recommend to buy the cheapest ready-ground coffee you can get your hands on to experience this. Alternatively you can smell an espresso machine that hasn't been cleaned since yesterday, or leave your French press overnight to find the same rancid aroma. In fact, even though Italian and French are said to produce good coffee, this is one of the defects I've noticed being very common in these countries. One reason is probably that the fat in finely ground espresso is prone to go rancid much faster than coarser grinds more common in countries further north since contact with air/oxygen and light combined with elevated temperatures are promoters of fats in the coffee (and fat in general) going rancid.

Mouldy
this can result from a variety of reasons. In areas with unstable climate (rain) the skin of ripe coffee fruit on the tree might burst/crack due to sudden increase in water content giving rise to mould. Secondly, in cases of natural/dry processing combined with uncritical harvesting (mixing ripes and unripes), humid climate or poor drying might give rise to mould because of uneven drying. Thirdly, dirty equipment and washing basins will give rise to microorganisms/mould. The mouldy flavour is easy to recognise as it simply takes on a mouldy/musty aroma and flavour. 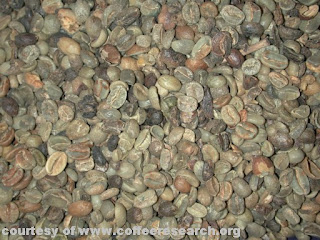 Mixture of different sorts of qualities and states of green
beans. Not a good starting point for making excellent
coffee (picture by courtesy of www.coffeeresearch.org).

Fermented beans vs. "fermenty style"
Fermented defective coffee might have an unpleasant vinegary acidity as opposed to a pleasant fruity acidity found in some high quality coffees in which the acidity has more winey notes. Coffee gone really far in this direction might have rotten onion-like flavour notes. "Fermenty style" coffees, such as natural/dry processed coffees, have by purpose a slightly fermented flavour but this is considered a virtue rather than a defect. It is a matter of taste, I suppose, whether you appreciate this and in my opinion well processed fermenty style coffees might have a wonderful rich fruitiness that I find very enjoyable.

Phenol, phenolic (also termed "rio" or "rioy" off-flavour)
Tim could not give a very clear account of the reasons for this defect apart from indications that it might be due to cracked/burst berries and that only one defective bean will affect the taste of a whole pot of coffee. Among the attending audience, this was by far the most unpleasant defect. My impression was a lingering unpleasant medicinal, iodine-like or "chemical-y" aroma. I looked into this and found a number of papers mentioning this in addition to Illy & Viani's book Espresso coffee (2005). According to a research paper from 1990, the compounds responsible for the off- 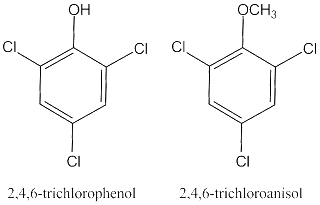 flavour are 2,4,6-trichlorophenol and 2,4,6-trichloroanisol (TCA). TCA is also found in corked wine, musty/muddy flavour in sake as well as off-flavoured raisins, so that's your taste reference if you want to look for it. Illy & Viani report, as Tim, that the origins of this defect is not yet clear. I've done a literature search and could not find any info on the origins either, so it seems we are still in the dark on this. However, this blog post by Tim reveals that he has seriously taken on the quest to single out how or why this mysterious and detrimental off-flavour arises and in the seminar he indicated that one characteristic he suspects might be relevant to look for is cracked cherries (resulting in uncontrolled fermentation). This is not a bad bet, taken that researchers have assumed that microorganisms might be a key element. It would have been fun if a roaster rather than researchers was to find the key to the origin(s) of this much discussed defect.

Two different perspectives on defects
Having recently read Illy & Viani's book Espresso Coffee - The Science of Quality (2005), I found that Tim and Illy/Viani have somewhat different ways of seeing defects. Tim's focus is on how the coffee (defect) comes out in the cup: a defect is defined by how it affects the flavour of your brewed cup of coffee. Illy & Viani, on the other hand, have organised defects according to origin of the defect and distinguishing marks on produced coffee. So: Tim's focus is on the cup and consumer, Illy & Viani on science and production. Their list of defects are
This list is longer than Tim's but if we compare the two lists we get the following 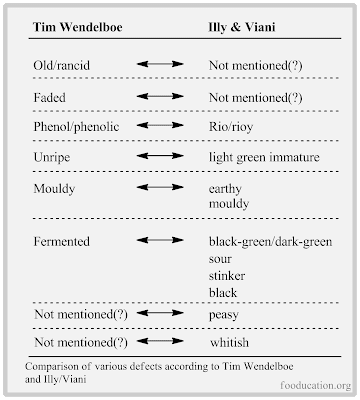 Clearly, they have different views on what defects are interesting, and the uppermost two defects are characteristic of what happens to coffee after ended harvest and processing, starting from storage of finished green beans to the point in time when you brew your cup. This period is clearly not the focus of Illy & Viani in their chapter on defects. Also, Tim bundles together all fermenting defects but gives various the reasons for this (these) defect(s).

From my point of view, Tim's perspective is the most relevant because it has it's focus on my experience of the coffee in the cup, not to mention what I should look for when I spend money on speciality coffee. Much the same as a wine enthusiast would be interested in when it comes to cork taint in wine.