In this post I summarise the last seminar I attended at the Norwegian Barista Championships this spring. It was hosted by former world champion barista Tim Wendelboe and focussed on coffee roasting. The following is what I understood from this seminar. 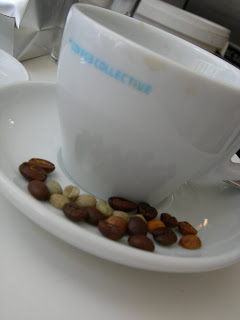 Profile roasting, or roasting profile
As a coffee drinker, I find it interesting to get to know the various roasters' profiles, or roasting personalities so to say. I believe each of the four Norwegian roasters I've gotten to know best have their own rather distinct style. The smallest, Madelynn coffee, have a fairly dark roasting profile resulting in more chocolatey and "brown" aromas with less acidity (and perhaps fruitiness) compared to the other "extreme" among the four of Tim Wendelboe. The coffees from Wendelboe seem to me as extremely clean and rich in acidity, but with slender body. Kaffa roasters, on the other hand, are on the lighter side of roasting but with more full-bodied coffees compared to Wendelboe (some of Kaffa's natural/dry processed coffees are among my all time favourites, I must admit). Finally, Solberg & Hansen being by far the largest speciality coffee roaster in Norway, produces such a wide variety of coffees and roasts that the wide variety might be said to constitute their profile, rather than a specific roasting ideal.

My understanding is that the term "roasting profile" can have two different meanings. Firstly, it can be understood as the preferred flavour characteristics which the roaster wants to achieve (example). Secondly, it can mean the time/temperature curve (profile, recipe) which is followed during roasting (example). Of course these two are closely related, but they are still two different things. I'm not sure what is the official definition is, if it exists, but it seems that the latter definition predominates among professionals (and on wikipedia). So, what is to be understood if we switch the two words to become "profile roasting"? Not exactly sure, to be honest...

Main issues in roasting coffee according to Tim
Some issues that Tim told about and was discussed were:

To round off this seminar posting series, I thought this illustrative video from Sweet Maria's coffee gives a good illustration of the various steps the coffee goes through during roasting. I can BTW recommend videos from Sweet Maria's Youtube channel in general; lots of interesting stuff.

1 Roasted whole bean coffee is at its best between one and three weeks after roasting, after which it deteriorates (non-water-spray-cooled, that is). From the day of roasting and a week on, the coffee might have a smoky aroma from the roasting, hence the recommended delay. Buying your coffee at a supermarket, you'll seldom have any knowledge about when it was roasted, and how long it has been sitting on the shelf.
Email ThisBlogThis!Share to TwitterShare to FacebookShare to Pinterest
Labels aroma, carbon dioxide, chemistry, coffee, flavour, heat transfer, learning, maillard reaction, review