In this second post I summarise shortly the first three seminars I attended during the Norwegian Barista Championships this year. 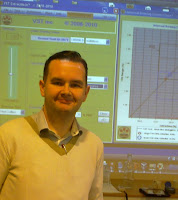 As mentioned in the previous post, the championships were not only competitions but also a number of seminars and exhibitions (the full programme is given in part 1). The seminars I attended, and thus am able to give some personal reflections upon are described below and in a following post.

SEMINAR: Extract Mojo – Analysis of coffee extracting using refractometer
This 1.5 hr seminar was given by invited contributor David Walsh working with R&D at Marco beverage systems in Ireland (although their web site is a commercial one they've published quite a lot of educational material such as articles and ppt slides). The presentation was in fact much more than a presentation of the Extract Mojo, and the session was a very clear and systematic presentation of coffee extraction in general. Questions discussed and explained were e.g.

This was my first seminar during the event, and I'd been happy enough even if I was to go home after attending only this session. Very well put together indeed, clearly presented and I learnt a lot. No doubt I'll need to write one or more posts on matters such as what is a refractometer, how does it work, opinions on use of refractometer in coffee, extraction and how to measure extraction/strength, some principles of extraction as well as how the Extract Mojo works in particular (I'd love to borrow one from someone...). In conclusion: if you stumble upon the possibility of hearing David talk about coffee, you shouldn't hesitate to attend. It's a safe bet. Until then you might want to follow him at his blog The other black stuff. I'll surely do so.

WORKSHOP: Various coffee brewing methods
Stian Horne from Kaffa roasters in Oslo hosted a practical workshop on brewing methods, starting off with a short primer on coffee from plant to cup, rapidly moving on to the practicalities. The concluding message of the introduction was:

the process from production until you buy it from the shop is (ideally) 4-6 months. At home, the last two steps of grinding and brewing takes 4-6 minutes. Hence, you have ample possibilities to ruin a wonderful coffee, the result of 4-6 months careful cultivation and production, in just about 5 minutes if you are sloppy. "Sloppy" might be using dirty equipment, overextracting, underextracting etc. Philosophy: It's well worth getting yourself some knowledge about brewing if you want to make the most out of the coffee you buy.

Stian listed 5 major points in coffee brewing in which each step has its factors to consider:
During the 5th point above he clearly stated that paper filter might impart paper taste and metal filters will impart a metal taste to the coffee. He also referred to blind tastings in which they had been able to identify the use of metal filter. I'm sceptical, but will not protest until someone have been able to investigate this claim closer (in fact, this might be a a great candidate for a Kitchen story/culinary precision). This is definitely a candidate for a blind tasting of my own.

The participants were then presented with a range of brewing equipments and methods and were allowed to test for themselves. We were invited to test the following brewing methods:
I gave the v60 + Hario kettle a try and found that even though the Hario kettle is said to give very good control over pouring it takes some practice to be able to pour consistently. Not easy at all. Furthermore, I guess this method leaves quite a number of variables out of your full control as compared to certain other methods in terms of pour speed, water temperature and extraction time. The siphon was, in addition to be a beautiful piece of equipment, said to be the method giving the best control over such parameters. Great fun, even though my v60 cup did not end up that spectacular.

SEMINAR: "Cup tasting - Take a dive into the marvellous world of coffee flavour"
Alf Kramer, previous president of SCAE, did a 1 hour seminar on taste and cupping. When I attended, there were a number of high school pupils (studying for cook/waiter) present and the seminar was most likely affected by this. Alf spent most of the time talking about our senses of taste, smell and touch (mouthfeel) ending up with the conclusion that the English language has a word that we don't have in Scandinavia, namely "flavour". Regrettably, we only have words for taste and smell in our language. Actually, Swedish fellow bloggers at Matmolekyler ran an informal survey in an attempt to find a Swedish word for flavour. Thus far we haven't seen any follow up post in the matters, and we are still waiting in anticipation ;)

Alf also talked about threshold values in sensing as well as sensory adaptation. In cuptasting, such adaptation is relevant since you after a while will not be able to sense the various nuances of the coffee aroma because your sense of smell is "saturated". The seminar was concluded by a triangle cupping (one single triangle).

One fascinating observation was how the attitude of several pupils changed during the seminar; starting out quite sceptical with arms folded, through somewhat interested, to actively involved. The lesson to be learnt from this is that you shouldn't stop being enthusiastic even though your public seems uninterested, little by little they'll come along. Well done, Alf.

In the next post, "Part 2b", I will summarise Tim Wendelboe's two seminars in defect-coffee-cupping and profile roasting, respectively. Again, two very informative and interesting seminars, particularly the former (....for me personally, that is). Hopefully, I'll be able to couple the defect cupping seminar with some literature information as I'm at the present enjoying Illy & Viani's "Espresso coffee".
Email ThisBlogThis!Share to TwitterShare to FacebookShare to Pinterest
Labels aroma, coffee, extraction, flavour, learning, review