A new open access journal for issues related to Molecular gastronomy has recently arrived: Flavour. According to the editors, the journal "seeks to create a shared forum for the publication of evidence-based research in an open access context that will make it accessible not only to researchers but also the wider community of chefs, policy makers and the public". This is no small ambition.


However, it is a very interesting ambition because one of the main efforts of molecular gastronomy is to bring together researchers and practitioners. The editors' thoughts about this, and other matters, can be found in the "Welcome to Flavour" editorial by the main editors Peter Barham and Per Møller.

Who will be reading Flavour?
Researchers are used to read research papers, but are practitioners like chefs etc.? In Norway, educational research indicates that e.g. teachers less than would be expected, and sought, turn to research for their own development (html and pdf, both in Norwegian). To generalise, they seldom read research literature in their own field, at least when compared with engineers, nurses and accountants. So, what about chefs and other professions that might benefit from results in Flavour journal? I really don't know, but I'd be really interested in seeing who actually reads this journal. What about some statistics on this in, say, a year or two? 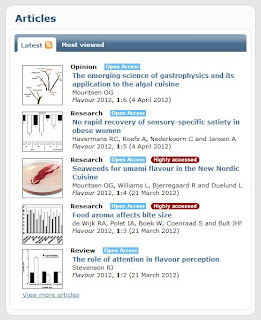 That said, I find the journal highly interesting and the fact that it is open access adds greatly to its accessibility. E.g. I found the review by Richard J Stevenson "The role of attention in flavour perception" highly interesting and covers more topics than the title reveals. One particularly interesting topic is what he writes about flavour as a unitary experience (why we find it more difficult to separate single scents than single tastes from a flavour experience). Highly recommended.

Perhaps review papers are a good way of reaching a more general public? My impression is that non-scientists often struggle with the tentative nature of science; that a scientific result is not necessarily a fact that will stand until Judgement Day. The result is that people feel that those inhabiting the scientific community "can't make up their minds". If a journal meant for a non-scientist public is dominated by short papers with singular results rather than reviews painting the large picture, I fear that this might be further cemented. Of course, if you have practitioner-researcher collaborations the picture changes dramatically because the researcher then can help put the research into practical use.

That said, I congratulate the editors with a great start and wish them the best of luck in their future efforts in spreading the good news.

Why are some considered food lovers whereas others are considered food geeks? (Dec 2010)
Relevance: how people's backgrounds and education affects how they see things
Email ThisBlogThis!Share to TwitterShare to FacebookShare to Pinterest
Labels education, flavour, molecular gastronomy, publications and books, review