Some years ago I experimented and wrote about what happens if you cook an egg not in boiling water but at, say, 64 °C. I met upon some surprising results ("The opposite boiled egg"), but could not give good reasons for why. But now, at last, the answer to why has appeared in the scientific literature! 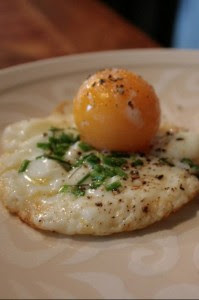 According to Harold McGee the "[...] egg white begins to thicken at 63 °C and becomes a tender solid when it reaches 65 degrees". Furthermore, "The yolk proteins begin to thicken at 65 °C and set at 70 °C [...]". (McGee, pp. 85) The molecular gastronomer Hervé This also writes about this in a similar manner in e.g. "Molecular gastronomy - Exploring the Science of Flavor".

So, for the perfect egg, keep it in a water bath at 65 °C for a long time, and you get an egg with a solid white and soft yolk. I tried cooking times between 1 and 26 hours, and at various temperatures, mostly between 62 and 68 °C.

This is of course inspired by methods used for meat where you can keep the temperature at, say, 58 °C and the meat will stay red still after a day in the water bath (low temperature and sous vide methods). It's not unnatural to think that the same applies to eggs, since both meat and eggs are mostly proteins and water.

The surprising result
In my experiments the eggs at 62-65 °C turned out "opposite boiled": a solidified (but not entirely solid) yolk came rolling out through a runny white! And on top of it, the time did seem to make a difference. Were my experiments poorly conducted, or was the suggested theory wrong?

Furthermore, eggs kept at a certain temperature at different time spans in fact made a difference, the picture below shows 65 and 68 °C eggs at 6 (upper) and 26.5 hours (lower), respectively. I know, not very scientifically done: different experiments at different days with different eggs etc..... 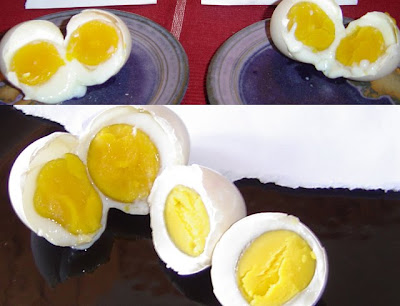 The explanation
The results are at first glance contrary to what you're used to when cooking meat, but it should really not be a great surprise because we are in fact talking about highly complex processes and quite different foods (meat has muscles, cells, myoglobin responsible for meat colour etc.; eggs whites are layered solutions of proteins; egg yolks are emulsions consisting of proteins, fat, water and other compounds etc.).

Recently, food researchers César Vega and Ruben Mercadé-Prieto published a paper in the journal Food biophysics with the title "Culinary Biophysics: on the Nature of the 6X°C Egg".

They give a clear account of the situation and make a distinction between low-temperature cooked eggs (The 6X °C egg, meaning eggs cooked at temperatures between 60 and 70 °C) and traditionally boiled eggs (in boiling water). Very informative and recommendable reading for the scientifically interested reader. Below, I'll highlight two aspects I found especially interesting in this paper: 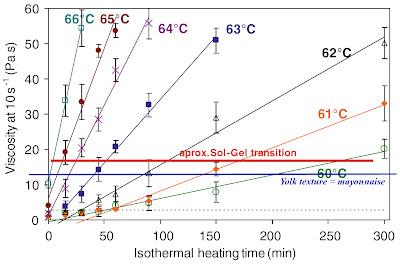 Egg yolk texture vs. isothermal heating time (i.e. for how long you hold the yolk at a
certain stable temperature). Copied* from Vega & Mercadé-Prieto (2011), figure 6, p. 157.
The blue line has been added by me for illustrative purposes.

I've added a blue horizontal line which corresponds to the yolk having a texture about like mayonnaise. The 66 °C sloping line shows that the yolk will have this texture almost as soon as it reaches this temperature. If you keep the eggs at 63 °C the yolk will achieve this texture after ca. 40 minutes, and if you keep the egg at 60 °C you have to keep it there for almost 3.5 hours. If you want the yolk firmer, you have to draw the horizontal line higher up (see below).

Highlight 2: an informal scale for viscosity
One problem with scientific texts is that there is a language barrier between researchers and the non-scientists (chefs, home cooks, teachers etc.). The authors of this paper make a serious effort to build a bridge across this barrier by giving everyday references for texture (which is scientifically defined by the viscosity). They have taken a range of common foods and ranked them along the viscosity scale so that they can use "mayonnaise-like", "honey-like", "marmite-like" etc. instead of some quantitative viscosity measure.

If you like your yolk firmer or softer than mayonnaise (viscosity 12.1 Pa s) as I've suggested above, you simply find your preferred texture in the table below, read off the value and draw a horizontal line at that value in the diagram above to find the respective times. 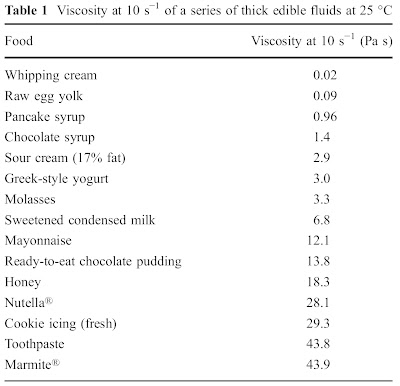 How to cook 6X °C eggs with simple equipment
If you don't have an immersion circulator (thermostated water bath) it is in fact not that difficult achieving this with some ordinary kitchen appliances. You need eggs, a large pan (the larger the better, e.g. 10 litre) and a cooking hob or oven and a cooking thermometer.
Recipe for the dish shown above:
The egg is cooked at 65-68 °C, yolk separated carefully and put aside. Fry the white, put the yolk on top, garnish with chives, salt and pepper.

Recipe for plain boiled 6X °C eggs:
Cook the egg at the desired (6X °C) temperature. Heat water in another pan to a rolling boil. Put the egg in this pan and leave for a short time; one minute maybe? (need to be tested). This should result in an egg with the desired yolk texture and still having a firm white.

Conclusion
The fact that we now have quantitative data on egg yolk firming is very welcome. Also, I really look forward to seeing if this texture scale is taken on by non-scientists. It might take time before this spreads and would probably require a constant effort of spreading and collaboration between researchers and chefs. Hopefully we'll see more such reports contributing to both more knowledge of what goes on in the pots and pans and at the same time building bridge between science and the public.

McGee (2004). On food and cooking: the science and lore of the kitchen. New York: Scribner.