How small are actually the things food is made of?

How small are single plant cells, proteins, sugar molecules? What about those things that spoil our food: bacteria, enzymes? All of them are really small, but when things get this small it is often difficult to grasp that there are huge differences in smallness as well. Below is a tip on how you might get to grips with this.

When dealing with food we talk or read about proteins, carbohydrates, plant cells, enzymes, bacteria and lots of different "really small things". Enzymes react, making fruit brown, proteins and sugars react to give what we perceive as brown coloured and pleasant smelling bread crust. Plant cells absorb or lose water through osmosis to become hydrated or dried, resulting in crunchy or dry/flabby vegetables or fruit. Bacteria and fungi either help us making leavened bread or yogurt, or they spoil our food rendering it unappetizing or even unhealthy.

Usually we talk of these things as macroscopic entities: proteins = eggs, fungi = visible mould on old bread, carbohydrates = sugar in the sugar cup. However, some times these are referred to in terms of their microscopic properties, and this is among the challenges when teaching about food (many of these things are actually submicroscopic, but in educational context we commonly refer to this as the "micro level").

The concept of "smallness"
During my time of teaching, I've realised that many people in general have not reflected on several aspects of this feature:

There's a lot of educational research out there on pupils'/students' mental models and understanding of atoms, molecules and scale. Harrison and Treagust (1996) might be a good start for those generally interested as is a paper by Jones and coworkers (2006), full references at the end of this post. When I first stumbled upon the web site Secret worlds: The Universe within probably inspired by the 60's-70's short film (Wikipedia and google video)1 by Ray and Charles Eames, I was fascinated by the possibilities this tool affords in visualising size differences in the microscopic world (there is a Powers of ten book as well. By the way, if you feel like brushing up on the maths of powers of ten just scroll down to the bottom of the post). The web page lets you zoom in and out of a given picture, just like you do on e.g. Google maps. However, here you can zoom all the way in to the core of an atom, and all the way out to "see" the milky way like a small dot! Give it a try right away, but come back here and read on!

The trick to visualising just how small or how large
The zooming in and out is fascinating in it's own respect, but there is one trick that gives this an added dimension because it allows us to compare how small things are with how large some other things are. Do the following:
What you see is how small the (sub)microscopic world is as compared to how large the macroscopic world is. 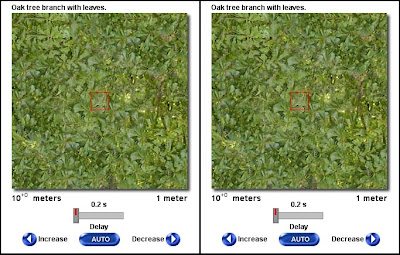 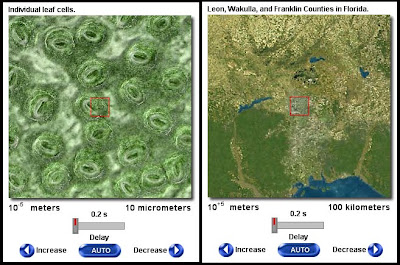 Zoomed 5 powers of ten in and out, respectively. Left side corresponds to 1/100 mm
showing individual cells. The limits of light microscopy is commonly considered to be
0.25 µm (micrometres), that is just about another 1.5 click on the "Decrease" button 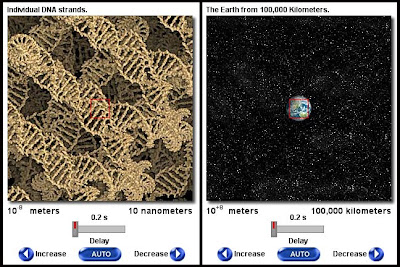 In the nanometer region. Remember that DNA molecules are among the largest
molecules on Earth. Even so, this picture is 1/1000 of the previous picture,
illustrating that leaf cells are way larger than these "gargantuous" molecules 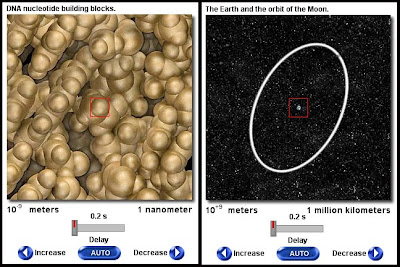 Another power of ten smaller on the left side showing large molecules,
but now the single atoms are visible. To the right, the Moon's orbit around the Earth(!)

Some comments and research findings
The Powers of Ten film is a quite popular tool for visualising the concept of scale and relative sizes, although I'm not aware of any teacher or resource advocating the "double window trick" above. In fact, Jones and coworkers (2006) published a research paper on the pedagogic use of the film. I've always felt that it is more difficult to envisage small scales than large ones, and this is corroborated in this report (at least for 11-14 years olds):

"Moving down in size from one millimeter, most students just think of things as small and have difficulty differentiating something nanometer-sized from something micrometer-sized; there is a point where small is just undifferentiated small to students" (authors emphasis).

This is suggested to be because "Visual clues are lost when students move beyond the microscale where small objects [...] are not visible" (after all, gigantic things like planets are visible with the naked eye as long as you move far enough away).

I share the students' notion, and find it difficult to convey that bacteria and enzymes are vastly different sizes. This despite that I teach about the two in the same breath when talking about what makes food spoil. I find the difference between plant cells and water is somewhat easier as I can use the nobel prize resource to envisage osmosis, which visualises difference in magnitude quite well.

The authors report that the film is quite effective in helping students to conceptualize microscopic entities. However, "[...] students find relative scale easier to conceptualize that absolute scale" and that "proportional reasoning is necessary for students to meaningfully learn about scale and scaling". If these are prerequisites for grasping these matters, it might just be that a comparative side-by-side zooming could be even more efficient.

Finally, the two mentioned papers mention that students have difficulties in grasping that atoms in fact contain a large proportion of empty space; "[...] the majority of students have an image of an atom that does not take into account spatial dimensions" (Harrison & Treagust 1996). Especially difficult is the fact that there is a "large distance", relatively, between the atom nucleus and the innermost electrons and that the electron cloud is vastly larger than the nucleus. Many students seem to believe that the inner electrons are pretty close to the nucleus. However, if the nucleus of a hydrogen atom was a 5 cm diameter ball, the electron cloud would start at, say, 1 km and extend to 5 km! This "vast empty space" is efficiently visualised using a single window: 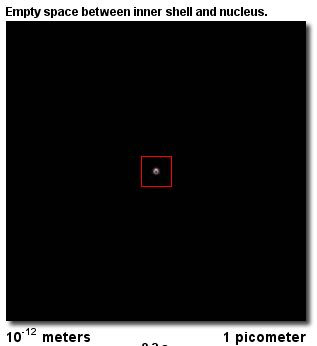 Just inside the innermost electron shell, looking through
empty space, seeing the nucleus in the "far distance".

Powers of ten - the mathematical concept
You might have forgotten, so I'll give a short brushing up on the (simple) mathematics behind powers of ten (in Norwegian: "tierpotenser"). It's simply a matter of multiplication or division by tens
Expressed in powers of ten this equals to 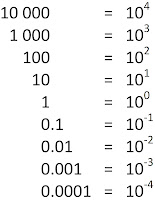 Meyer & Land (2003). Threshold Concepts and Troublesome Knowledge 1 – Linkages to Ways of Thinking and Practising. In Rust (Ed.), Improving Student Learning: Theory and Practice Ten Years On (Vol. 10). Oxford: Oxford Centre for Staff and Learning Development (can be read at google books, or downloaded as pdf)

1 The Powers of Ten official site also has an interactive web page but on this page the picture is displayed only if you hover the mouse pointer over a given power of ten. Hence, it is not possible to do a side-by-side comparison
Email ThisBlogThis!Share to TwitterShare to FacebookShare to Pinterest
Labels chemistry, education, enzyme, learning, nutrients, powers of ten, proteins, review, software