"The fun-flavoured way to learn science"

Paulina Mata and her colleagues in Portugal have produced a very interesting booklet on "Experiments for the family to do together" (...in the kitchen).

In a previous post on inquiry-based teaching methods and promoting students' argumentation skills I referred to a European Commission report. In this report, it is referred to two best practice examples, one of them being the project Pollen (EU Sixth Framework Programme 2002-2006). Slightly embarrassed, I must admit not knowing that a part of this was a resource for families to learn experimenting with and through food. 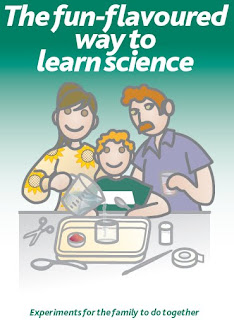 The Portuguese Pollen team together with Paulina Mata have developed the booklet "The fun-flavoured way to learn science - Experiments for the family to do together" in Portuguese and English.

The booklet is written in a very simple language and seems to be aimed at a general public, both children and adults, in order to stimulate adults to experiment more at home together with their children (or vice versa). It starts out with some general comments and recommendations on experimenting at home, and goes on with a number of very simple and straightforward experiments. One might say that many of the experiments are overly simple ("Why does an ice cube float?", "Do vegetables contain water?" etc.). However, I think that such a "low-level" approach might be a very good idea of several reasons:

However, there were a couple of eye openers for me as well, such as the instant chocolate cake-in-the-mug: a five minute one-portion chocolate cake made in the oven (see p. 54 in the booklet). This might be the topic of a later post.

Finally, a good thing about such large projects is that one should be able to trust that the scientific/pedagogic basis of the material is sound and solid. It is hereby recommended.