In a simple demonstration playing around with light products floating/sinking in water a fascinating contrast emerges.

Try submerging the following two pairs of products: ordinary and light mayonnaise, and diet coke (or other cola vs. cola light). 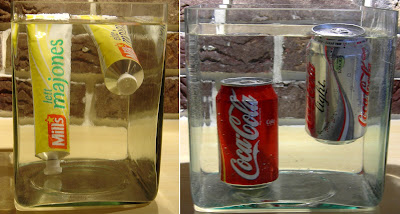 Explanation
The term in question is density:

Fat floats in water. A larger proportion of fat makes the mixture closer to pure fat and vice versa.


Cola
Cola can be considered as water with some dissolved material. Ordinary cola is, as such, a sugar solution with a few other additives (taste, aroma, colour etc.).

Cola light contains the artificial sweeteners Sucralose and Acesulfame K. Both are far sweeter than table sugar, sucrose (650 times and 180-200 times, respectively, ref. Belitz). Thus, far less sweetener is needed. If we assume that all other ingredients are the same, then far less material is dissolved in the light version. The same total volume with less material --> lower density. Thus: pure cola light would float up in ordinary cola taken that they didn't mix.


In both the mayo and cola cases, there is some air (or trapped gas) inside the tube/can. This makes the tube/can float higher than in the case of the pure mayo/cola. However, as long as the volumes are the same, this doesn't make any difference. If it wasn't for the air, both cans would in fact sink, and the experiment wouldn't be.


A question of using and understanding scientific concepts
The concepts relevant to this is not only "light", but also (amongst others) "(chemical/dietary) energy" and "density". If something floats, we usually say that it's "lighter than water". However, two kilograms of wood is heavier than one kilogram of water, but it still floats. To me as an adult, it's probably easy to grasp, but placing this in an educational context makes it important to use the correct terms. So, "cola has higher density than cola light" would be more correct.

It's quite easy to put this to the test: measure both the volume and weight of a can/bottle of cola and compare. The one that sinks (highest density) weighs the most taken the same volume. Another version of this experiment is concealing the labels, letting the students know the content without telling which is which. The task is then to use knowledge and reasoning to deduce which is which.

Using the term "diet" rather than "light" would of course make the whole case less diffuse, but then a fascinating aspect in the experiment and following discussion is lost. This is the reason for using "light" instead of "diet" in the first hand. However, this may be a nice way of introducing the energy concept of (chemical) energy, kcal and kJ, and contrast this against "light" used in different contexts.


Natural sciences are evidently not only concerned with nature itself, but just as much the language describing nature.