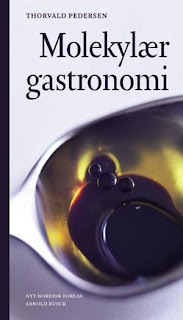 Thorvald Pedersen has been writing about food and cooking from a scientific perspective for years (mostly in Danish as far as I know), probably well before the term molecular gastronomy gained much attention.

Now he's published his third book on the subject and has dared to use the debated and, according to some, oft misunderstood and misused name Molecular gastronomy. In fact, Pedersen has suggested his own definition of the term, being different from Hervé This' and Harold McGee's:
This debate has been running on the MG mailing list also, by the way.

Anyhow, the book has been out for a few months and I got it for present. I've always loved reading Pedersen because he's got this way of making everything warm and cosy, very Danish in a way (Danes seem to be far more relaxed and life-enjoying than us Norwegians, or Swedes for that sake). Reading his books and articles are almost like having one's grandfather telling stories. For that reason, I think Pedersen is even more enjoyable to read than This and McGee language-wise. He seems more relaxed somehow, maybe because he has nothing to prove, being a professor emeritus in chemistry.

The book is shorter than his previous books "Kemikeren i køkkenet" (Chemist in the Kitchen), a collection of his articles in the Danish magazine Dansk Kemi (Danish Chemistry) and "Kemien bag gastronomien" (The Chemistry Behind the Gastronomy) which is more of a textbook in food/cooking science or molecular gastronomy.


"Molekylær gastronomi" is divided based on short articles into two main parts (following the introduction):
In terms of what he writes, most of the results refer to McGee and a few other sources, including his regular food column in Dansk Kemi (the Danish research on gourmet salting for juicy and tender meat is especially interesting, and I've planned to write a post on this). Hence, if you've read McGee, there are not many new astounding discoveries.

One interesting thing is how he uses the tables of nutrients given the various foods. Most commonly people use such tables looking for amount of sugar, fat, whether a food contains gluten etc., that is health purposes. Pedersen however, uses this information for cooking purposes, and he gives the relative amounts of nutrients by dry weight as well. This is really useful, because various foods are easier to compare. One example is looking for amount of starch in different sorts of potatoes, which might have different percentage amount of water. Given values by dry weight makes it much easier to compare (there seems to be something wrong in the potato tables however, as the amount of nutrients add up to more than 100%).

In my opinion, the book is worth buying just for the sheer enjoyment of reading it. Also, I warmly recommend his food column "Kemikeren i køkkenet" in Dansk Kemi, mentioned above, freely downloadable (single pdf files).
Email ThisBlogThis!Share to TwitterShare to FacebookShare to Pinterest
Labels molecular gastronomy, people, publications and books